So here it is. The inevitable Moonrise Kingdom post. Made possible by the fact that I'm white, work in the creative industry and live in Hipster Yuppie central. Plus the new episode of Girls isn't yet available on my illegal download site of choice.

People seem to have a bit of a Marmite relationship with Wes Anderson. Some loathe his work, finding his style sickeningly twee, his characters devoid of meaning and interest, and his plots... non-existent. Others revel in the vagueness he casts in the dusty pastel light of imagined nostalgia. Love it or hate it, his recurring theme of disconnected, flawed adults encroaching on the apparent innocence of youth is unparalleled. His loyal ensemble cast defined so much by their possessions and hobbies, they can say everything without the need to say anything at all. 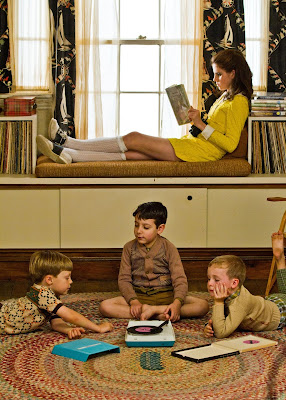 While Anderson's previous films (Rushmore, Tenenbaums, Darjeeling) focus on grown-ups trapped by the expectations of their childhood, Moonrise Kingdom brings the emphasis onto the children. His pre-teen protagonists long to be fugitive from the suffocating emotional tension at home before the real damage - the damage their parents and guardians so fearfully obsess over - truly sets in.

As a viewer, Moonrise Kingdom initially comes across as an escapist fantasy. Reading the tweets surrounding its opening last week, many people were leaving the film feeling blissfully upbeat. And, with all the whimsical detailing, ironic one-liners and small children talking the big talk, it certainly has all the attributes of Bugsy Malone as interpreted by Jack Spade and Anthropologie. Personally, I was nevertheless left with a haunting feeling - a bitter taste in my mouth that suggested something was amiss. Perhaps, the innocence of the kids served only as a distraction to what was really being said about the empty selfishness of adulthood. Perhaps the joy I and my fellow Dalstonite audience felt was simply blinding denial. As Anderson himself said in a recent interview with WSJ, "I don't really know what I want people to take away from my movies. Nothing specific". Nothing specific - the beating heart of a hipster yuppie lifestyle.


Moonrise Kingdom achieves intense whimsical charm that devolves into such oppressive inhuman cuteness I wanted to shoot myself in the head.
— Bret Easton Ellis (@BretEastonEllis) May 26, 2012