You Talkin' To Me?

The new one week old* Samsung Galaxy ad is brilliant not just for giving Apple - and their fanboys - a well-deserved clip round the ear, but also for the acute attention to detail on casting and styling. Though the visual and behavioural differences between the Apple fanboys and the Samsung converts are slight, they are nonetheless powerful. These minute signals represent a deep understanding, on behalf of Samsung, for where their potential market lies.


While other technology brands are busy striving to become Apple, Samsung have looked for ways to beat them. And they found it in Apple's customers. In a post-Jobs world, there's a growing legion of Apple devotees who are getting sick of the taste of the Apple kool-aid. They've learnt the value of a great piece of mobile kit, and they're increasingly unconvinced that the iPhone is - or always will be - the only option for their needs. 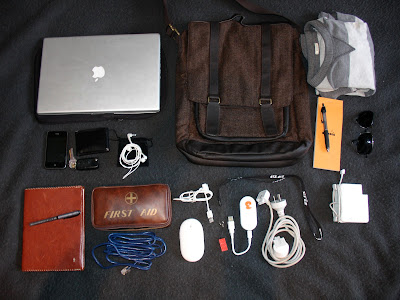 Furthermore, and as is smartly yet subtly observed in the Samsung ad, Apple customers are fed up with wearing the metaphorical "I'm a Mac" t-shirt at all times. Back in the day (2009), being a "Mac" meant you had taste. You had a subscription to Monocle and Wired. And you wore your artisan aged denim with a Supreme shirt. Now it all feels a bit obvious and, worst of all, normal. As the Samsung ad highlights - even our parents are "Macs" now. Ouch. 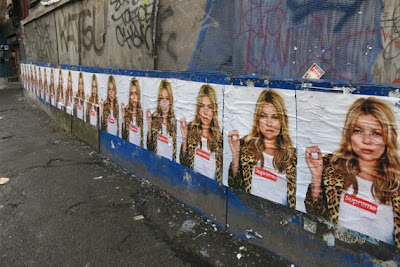 Of course, Apple has its eyes on the largest market share possible and will hardly be trembling at the idea of losing its niche group of designer-type fanboys to Samsung. But being both loved and cool is a tricky game for brands, and it rests in the hands of the world's taste makers. If Samsung can lure that group over to their team, it doesn't mean they'll win the game right away but people will still turn out for the show.

From A to B

"We live in tension between what we were and can think and these new things that we are unable to represent."

Yesterday I went to an astounding exhibition on contemporary cartographies at Barcelona's Caixa Forum. It was a beautifully curated selection of maps ranging from the physical to the emotional - each striving to translate and codify the human experience. 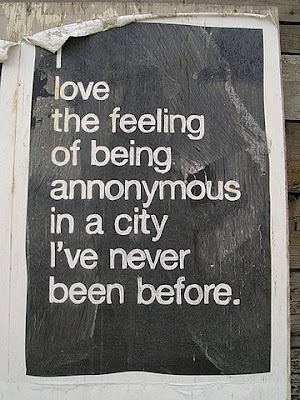 I love a mind map (or spider diagram). Though mine often resemble the crazed scratchings of a mad person, they nonetheless help me get my thoughts down and literally map out the issues - and possible solutions - at hand. From work to personal challenges, there's very little that a mind map doesn't tease out and bring structured thinking to. So it was inspiring to see how other people navigate both their real and metaphorical landscapes.

Zarina Hashmi's series, 'Cities I Called Home', are minimalist aerial views of various cities. Their raw, etched nature reflect her ingrained knowledge of each city, but also the tenacious nature of memory. How easy it is for the mind maps of one's environment to deteriorate out of context. 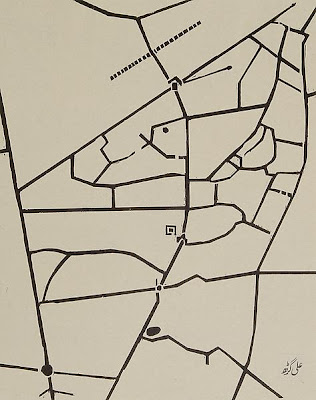 Perhaps the most impressive work in the exhibition were Mark Lombardi's 'narrative structures'. His sociograms document financial and political frauds and were, according to Wikipedia, his way of transcribing the thousands of index cards which constituted his research. Evidently unable to cope with such vast quantities of information, Lombardi hand-processed them into a format which reflected his thinking style, rather than simply the linear nature of the facts. At the risk of sounding horribly pretentious, Lombardi's "narrative structures" strongly reminded me of Sol LeWitt's wall drawings: The hand of the artist (or in LeWitt's case artists) creates a near-mechanical output that are at once rigourous and beautiful. 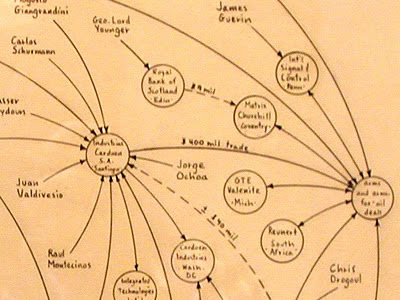 The exhibition was especially poignant for me as all my maps get updated with new cities, new journeys and new memories. But while the physical journey from London to Barclona has been linear, the breathing space this break has provided will loom large and bright on my emotional map for sometime to come.
Posted by Unknown at 20.9.12

Do you remember when Haagen-Dazs was a thing? A sexy, naughty, erotic thing? In a recent 80’s movie marathon, it was exhilarating to see Haagen-Dazs product placement in both Wall Street and Fatal Attraction as a signal to conspicuous consumption and grown-up decadence. In the former, Daryl Hannah throws a tub in the microwave while making bedroom eyes at Charlie Sheen, who is busy with his MagiMix (yes, really. These were simpler times for us all). While in the latter, pre-crazy Glen Close is a “strange girl” to Micheal Douglas’ “naughty boy” over a pot of pralines and cream. The branding and advertising of Haagen-Dazs in the late 80’s and early 90’s was so risque, my pre-teen self was almost certain that it lay at the heart of how babies got made. Lunch may have been for wimps but Haagen-Dazs was for sexy-times.


So what the hell happened? Why did a brand who encouraged us to “lose control” end up losing its mojo? Since when did Haagen-Dazs get relegated to the freezer cabinets of corner shops and the clutches of single females who want to eat their feelings?

Firstly, I blame Nigella. I blame her for a variety of things, mainly for fauxgasming into her fridge in the middle of the night. But in this instance, I blame her for luring women back into dessert making with the promise of turning each and every one of us into a ‘domestic goddess’. Before she came along - and as Daryl Hannah’s character in Wall Street is testament to - all a woman had to do to snag a man was to backcomb her fringe, chuck some white silk sheets on the bed and crack open the Haagen-Dazs. No Cath Kidston pinnies and coo-ing over cupcakes for Daryl. The Haagen-Dazs advertising may have been provocative and alluring, but the subtext (or the reality for its target market of 28-35 year old couples) was that it was acceptable for a hostess to put a tub of ice cream on the dinner table and call it dessert. 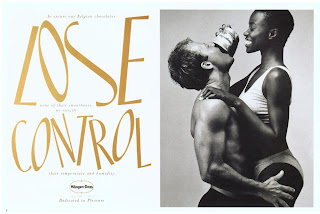 Mostly, however, I blame Haagen-Dazs. They had everything going for them, even in the face of adversity and rising competition. They achieved what so many fattening or unhealthy food brands would kill for - turning their main criticism into its main selling point. Until 1997, BBH created memorable, award-winning campaigns that transcended the category by positioning ice-cream as a glamourous, indulgent treat that absolutely wasn’t for kids. Quadrupling sales in the process. And yet, since dropping BBH, Haagen-Dazs have slid slowly towards the unremarkable. Just a different packaging to Ben & Jerry’s or Green & Blacks. 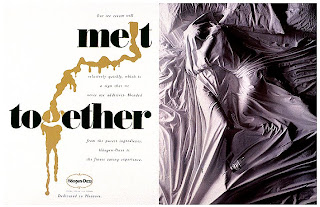 In 1995 The Independent noted BBH’s leveraging of “post-aspirationals” - “Five years of recession and a complexifying market place have encouraged advertisers to appeal to consumers not so much on the increasingly intangible attraction of what they want to be, but rather on the more certain repulsion of what they definitely do not want to be”. Recession and a complex market place? Sounds familiar. If there was ever a moment to persuade people that they definitely do not want to be a bunch of post-Olympic, cash-strapped, homemade bunt cake-making, frozen yogurt eaters, this is it. Haagen-Dazs - we want you to bring sexy back. No spoons required.
Posted by Unknown at 11.9.12

So much bro love to my MB massive, and to the very wonderful and talented Nick Macdonald. xx