The bad news is that I've spent the past 4 days trying to find "social media interns" who can use Twitter to come and help me on a project at work. I had visions of hundreds of eager, credit-crunched, tech-savvy young things contacting me desperate to prove the business application of their online social skills. Strangely not. Of the few who did respond all of them faked their Twitter acumen, only to be rumbled when I asked if I could "Follow" them. So if it's not young people making the UK the Most Twittery Country, who is it? I'm confused.

The good news is that I do use Twitter and, slowly but surely, have gathered a following on my work Twitter of nearly 700. Last week I decided to conduct a little experiment in order to promote a film a made (see below). I uploaded the video onto Vimeo at 2pm on Thursday, put a Tweet out, asked a couple of friends to Tweet it, uploaded it onto the Creative Review feed and by Friday had totted up 1,000 hits. Unbelievable. The power!!

The signs are there - it looks like AW09 is going to be all about the 90s and it's not just because we've lately been enjoying the best of Michael Jackson before all the facelifts and kiddy fiddling.

For those of you who want to re-familiarise yourselves with the key looks of the era, I point you to Paris is Burning - the film that introduced us to Vogueing. God bless it.

Check out this film I made with my colleague/friend Rex McWhirter for Moving Brands. It is made entirely from found material and social networking sites to illustrate the fast moving world we all live in today.

Check out my ghetto-fabulous nail job, done by the lovely Georgia of WAH Nails during their pop-up session at Cargo on Sunday afternoon. More photos can be found on their blog by clicking here. 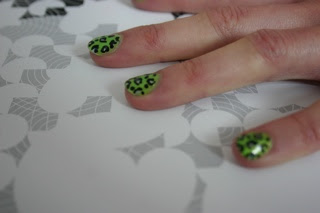 Ok, I'm going to propose something a little controversial. In this economic and environmental climate we're meant to be focusing on pared-down austerity and the ethos of make-do and mend. Apparently there are currently 8000 people waiting for allotment spaces in order to grown their own and I've talked before about the chic Waitrose Essentials range and Mary Portas' quest to revamp charity shopping. Everywhere you look it seems we're holding back and reining in. 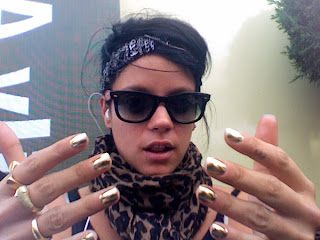 Well, I'm suggesting that it's not exactly everywhere. Alarm bells were set off on my trend-o-meter (yes, I do have one of those) while watching the footage of this year's Glastonbury. In their bright neons, animal prints, glitter and plastic fantastic, the crowd appeared to be rejecting the notion that lean times must necessarily equal lean accessorizing. And it seems that people have not left their "f*** it all, let's have fun while we can" mentality in the fields of Glasto. Since then, Miss Selfridge has teamed up with HedKandi to produce a range of dresses that practically scream hedonistic good times. Equally, a trend towards 'fake', inspired perhaps by the war-time habit of drawing a pencil line up one's leg to imitate tights, seems to be growing. Shoulder pads are turning our shoulders into dangerous weapons, Shu Uemura has a whole window at the front of Selfridges for their fake eyelashes, and Lily Allen was on Twitter this week showing off her gold fake nails. It seems that times may be hard. but we're British and we'll never let it show.


For incredible nails, check out the new Wah Nails in Dalston.
Posted by Camillastore at 14.8.09

Email ThisBlogThis!Share to TwitterShare to FacebookShare to Pinterest
Labels: eco-fashion, trends
To shop and to buy from this day forward...

Apparently Selfridges has got a wedding license! As the girl who just last Wednesday found herself being unceremoniously pushed from the store at closing time, the thought of combining the love of my life with... the guy I want to marry is pretty exciting. A cousin of a friend did just that some years ago and here's the picture to prove it. 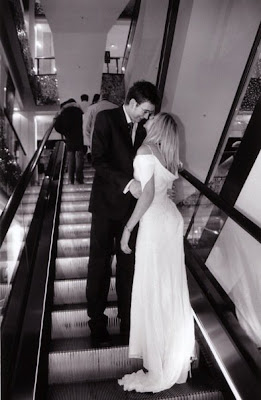 Thanks to Selina and Matthew for use of their image.
Posted by Camillastore at 14.8.09

The ideology and imagery of the American housewife in the 1950s.

My university dissertation was on the American housewife in the 1950's. It was a fairly depressing account of bright women locked in suburbia, cleaning for 8 hours a day just to take their mind of potential nuclear attack.
Wish I'd discovered this Jello ad at the time!

Via BoingBoing.net
Posted by Camillastore at 13.8.09

Enjoying these wall vinyls from Hu2 - nice to see some that are slightly more 'sharp' than the more decorative ones floating about.

Magazine holder made from thrown-away sport felt. From Jonas Forsman 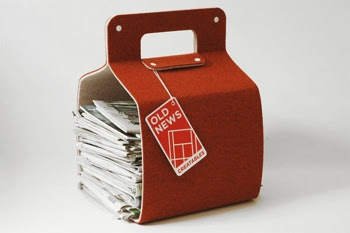 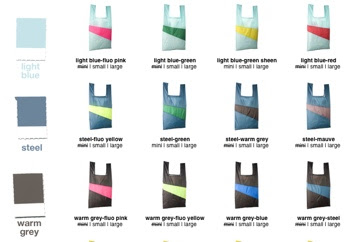 Email ThisBlogThis!Share to TwitterShare to FacebookShare to Pinterest
Labels: bags

Every few months my Aunt, who resides in deepest, darkest Dorset, hits the London retail scene so hard the credit card company once phoned my Uncle to check the card hadn't been stolen. And so it was with much forethought that I took a long weekend to give me both a prep and recovery day either side of her weekend visit. In 48 hours we covered Camden Passage, Covent Garden, Bond Street, Selfridges and Marylebone High Street, stopping only to eat and sleep. As such, I am now 100% updated with both the highstreet and designer offering in this awkward time between Summer and Autumn, between Sale and New Season, between so-last-week and so-right-now.

And it is with some authority that I can say just one word: Whistles. When Jane Shepherdson left Topshop to refresh Whistles we knew good things would follow for the previously mumsy store and, my, hasn't she done well! They have seriously raised their game and, I think, lowered their prices - making them a winner all round. 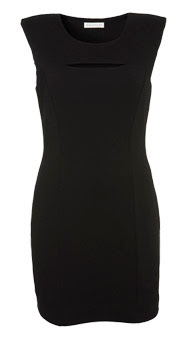 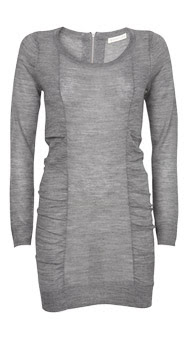 And saw this on someone at a wedding last weekend 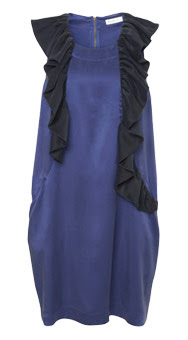