Love "lyfts" us up


It was 3am in San Francisco, I was hazy with jetlag and a cat had just vomited on my bed. Airbnb living may not always offer the sanitised, airtight luxury of a hotel room, but I'm prepared to put up with a spot of feline yaking in return for the overwhelming benefits it does offer.

Airbnb is still relatively new in the sense that most of us have heard of it, some of us use it, and all of our parents are convinced it can only end in rape, murder and the eventual sale of our organs on the black market. The level of trust, especially in a shared home, that is required between perfect strangers is not only unprecedented but also beautiful - in the hippy, liberal sense of the word. If you speak to anyone who regularly uses Airbnb, they will tell you that both hosts and guests are a self-selecting type; warm, open, post-Internet idealistic, and excited by the real life experiences that a well-thought out user experience can deliver. 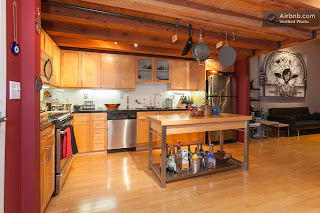 Coming from England, where we're still feeling a bit too British to be spending intimate, quality time with people we met off the internet, it's inspiring to see that the Airbnb mentality and the "share economy" is alive and well in SF. Lyft transforms ordinary drivers into taxi cabs, or as they say "on-demand ride-sharing for cheaper safer rides". When my friend and I booked, our poor driver did not realise he was picking up two branding professionals who were rolling several margaritas deep and ready to chat. I even took notes. 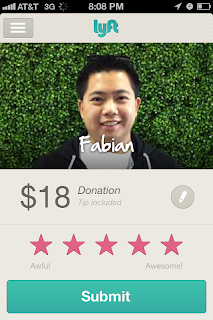 To become a Lyft driver, you are comprehensively vetted - from driving tests to personality tests. Lyft know their success relies not just on trust between two parties, but also on the entire journey being good enough to disrupt the existing taxi cab market. To this end, we were also invited to charge our iPhones (chargers for both 4S and the 5 were onboard), to help ourselves to gum and even to fist bump our driver upon arrival at our destination.


Our driver explained that Lyft is rapidly expanding into other US cities, but their prominence in SF is not merely down to a tech-savvy customer base. A less than ubiquitous bus system and a somewhat dodgy underground, means that SF has a unique transport issue - with around a million people trying to get around the city each day, taxis can become rare and highly sought after.

Lyft is a fascinating addition to the "share economy" roster and it's going to be interesting to watch how it - and others like it - change the way we view transport, just like Airbnb has transformed how we travel. Cat puke aside, obvs.

Wanting what you have

No lengthy write up here. I just really like the juxtaposition of these two films. Both very different, but both around the theme of "if you love them, let them go".