A code of behavior that delineates expectations for social networking behavior according to contemporary conventional norms within a society, tweet-up, or Facebook group. The British word Appiquette, literally made up by Camilla in 2011.

Most of us are now accustomed to the modern table setting - knife, fork, phone (at home) or notepad, pen, laptop, phone (at work). The occasional glance at incoming emails, goes barely noticed by present company. But how are we managing the new wave in location-based social networking? At what point and with whom can one politely check-in on Foursquare, or ping out a Hashable? It's a modern conundrum.

The Social Show-Offs - The meeting itself will have been organised across so many different platforms, they both turn up late, made even later by the fact that they are texting and DM-ing each other as they approach. The restaurant will have been selected through Yelp, the location Google-mapped, photos from Foodspotting screen-grabbed and the event iCal-ed, and tweeted ad infinitum. Once actual IRL life contact has been made, both then sit in silence for the first 10 minutes updating, before spending the rest of the night looking at apps on each other's phones.

The Denier - This is the trickiest one of all. It's your friend with the Nokia N79, the one you love dearly but who probably still enjoys the occasional CD-Rom of a weekend. You don't want to get into a debate about how "expensive iPhones are, and what's the point anyway?", but equally, you are eating at that super-cool new restaurant and you need (NEED!) to create some content around it. Here, you have two options - keep filling their water glass and pray they go to the bathroom long enough for you to check-in and Instagram a shot of your food. Alternatively, you can re-consider your relationship - either with your friend or with your social media problem. 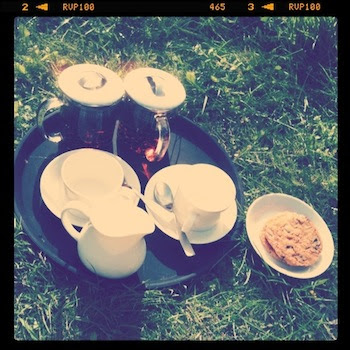 The Responsible Networker - This person knows just how pretentious all this checking-in business is, but isn't going to let that stop them becoming Mayor of Foursquare. Yes, they may choose meet up spots based on the social cache attached to it ("I'm at Shoreditch House with 5 others"/ "I'm at Heathrow Terminal 5"/ "I'm at The Infinite Loop, Cupertino". And yes, they may turn up 10 minutes early to guarantee some alone time with Facebook and the bar's free wi-fi. And though, once their companion arrives it's phones down and interacting in real-time, they may occasionally be caught in dreamland, wistfully composing a description of the night in 140 characters or less.
Posted by Camillastore at 22.5.11