It's Not So Grim Up North

This past week allowed me 24 hours in Leeds. Not having been there before I was thrilled to discover that the city is just like its people - bold and brash but with the soppiest of hearts. Buildings proudly erected during the Industrial Revolution have been confidently brought up-to-date and, with additions such as Harvey Nichols to the stunning Victorian Quarter, Leeds is now a very modern city with a style uniquely its own.

Speaking of style, I was also fascinated to see a much more groomed and out-going look in the Leeds locals, than we are used to here in London. Topshop - ever the benchmark for what's really going on - had edited the collections to include a lot more 'fitted' dresses and skirts and towering, WAG-ish stilettos. On the street as well, the men were predominantly suited and booted with impeccably coiffed hair and proper 'statement' shirts.

I spotted Jill and Eddie (below) queuing for a bagel - I've never seen such attention to detail. From the outstanding cut of his military jacket, to her slouchy Vivienne Westwood boots and Pillar-box red watering can handbag. Brilliant! 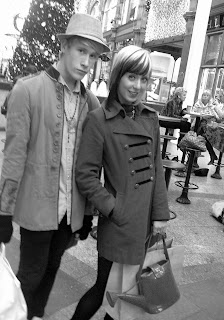 PS. With airline fares as they are, I'm hopefully going to be doing my bit for the depletion of the ozone layer come 2009 and reporting back from some of Europe's most stylish and trend-setting capitals. All recommendations and offers of spare beds welcome!
Posted by Camillastore at 23.11.08