On this week's Desert Island Digital my castaway is Panja Gobel. Panja is a designer of immersive environments and digital experiences, as well as a pretty cool cat. What she doesn't know about the interplay between people and technology isn't worth knowing. Just last month she was on the jury for the D&AD Awards in the Digital Design category.


Here's her choices for life on the island.


Draw Something - I love the way an app can have such bad UX and still gets me hooked just on it's concept. No, I don't love it - I'm suffering from UX huffing and puffing syndrome. Recently they integrated a share button, that spoils battles by posting them prematurely on Facebook. Brilliant, who thought of that? It should really be put into the replay section of a past battle. So listen up and sort it out. I also would like a gallery, so I don't have to painstakingly screen grab it myself and generally it would be good to have some sort of scoring table. Then make everything look a little nicer and we are there. Despite these extreme UX issues I am addicted. Normally I try to have at least 10 battles going parallel so I always have at least 2 a day. Most days I just wish my finger was more pointed.


@lukid - always a welcome and wayward distraction to my life


David Weiss of Fischli & Weiss died a few days ago. They were the best and most influential art duo ever. Personally I thought they were immortal. I also would be making a lot of stuff like that on the island.


This is the kind of stuff my daughter builds around the house for us. These little worlds always cheer me up. Apparently this one is a series of cakes. 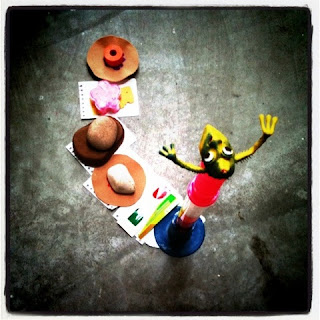 
Asimo - I just love him and want him to come with me anywhere I go. Wonder how he would cope on an island… not really sure wether he could swim or whether the sand would damage his mechanism. Obviously Asimo, with his Honda genes also loves Fischli & Weiss, which will help.