Just for kicks I sometimes enjoy messing with the Netflix algorithm by watching movies way out of my usual 'taste preferences'. So with this in mind and to cheer myself up a bit, I watched 'The Bridge' - a moving documentary about the people who take their lives by jumping off the Golden Gate Bridge in San Francisco.

I've driven across the Golden Gate several times now - more often than not in The Great Red Shark while listening to the soundtrack from The O.C. But even then, the bridge holds a strange sense of foreboding within its straining ironwork and startling russet tones. The inclement weather patterns, for which SF is known, seem to begin and end at the bridge. The mists roll in and out, sometimes gleaming brilliantly in the Californian sun, other times shrouding the entire structure in cloud. On the gloomy days, with the rain and the wind and the shadow of Alcatraz in the near distance, it really couldn't be further from the picture postcard image of majestic structural engineering. 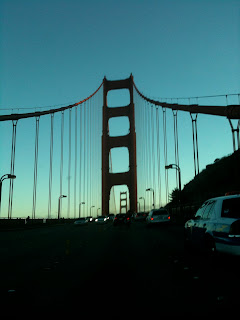 'The Bridge' includes footage of real people jumping, shot over several months by the film's makers. Apparently, on average, two people take their lives at the bridge every 15 days. It's easy, it's dramatic and it's high enough to be a sure thing. But the most emotive element in the film were the interviews with the jumpers' friends and family. Just like the ambiguous nature of the bridge itself, they veered between understanding the actions of their loved ones, while struggling to comprehend how anyone could fall so deeply into despair. 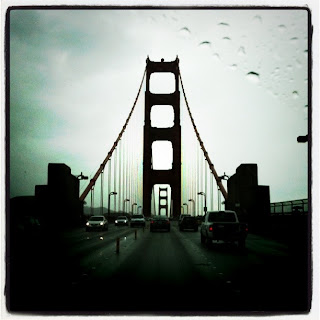 One of the parents interviewed wondered if her son chose the bridge because he "wanted one last chance to fly". The footage of him - Gene - pacing next to the barrier for hours before finally leaping triumphantly onto the rail and throwing his arms up in a swan dive takes your breath away. Just as the bridge is a testament to man overcoming nature - connecting two sides of San Francisco bay - so these fatal acts depict an individual's conquering of his or her own destiny.

You can check out the trailer out here.