These days, it's not often that you find something decently digital emerging from a traditional media outlet. And, when you do, it's generally from the stable of the big digital hitters, namely Wired, Fast Company and certain bits of The Guardian. But this morning, I noted a little tweet pointing to The Sunday Times Social List. A clear, well animated video succinctly explained what on earth this was all about and (despite the fact that it was not embedded from YouTube and, thereby shareable) I clicked on through.

After a simple set-up interface and a few nice infographics later, I was told I was a "Pioneer" and 129th on the Social List. Not bad for a Sunday morning with a cup of tea. 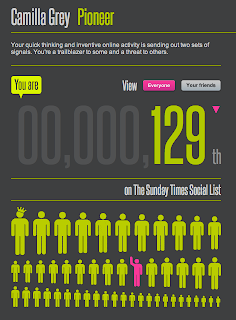 I'm interested to see how this develops. Unlike Wired's recent "Most Influential People in Tech" issue which was put together through investigative journalism (read nepotism and favouritism), this list seems to be growing out of real influence across the four key social networks - Facebook, Twitter, Foursquare and LinkedIn. Even better, its success and failure will rely on the very people hopefully to be included in it. It's a win-win situation - The Sunday Times has their work done for them and meets the leading lights in Social, while social influencers get their clout verified.

It may not have the smug factor of The Rich List, but I'll be watching my ranking like a hawk! Come on Ashton, please RT me into the top ten!
Posted by Camillastore at 15.5.11