Kinder Eggs clearly had no idea who they would be dealing with when they Kinder Surprised me with an Augmented Reality toy. The only related video I could find on YouTube was this one from the makers - Total Immersion.

Unlike these happy-go-lucky kids rocking out to a bit of Phoenix and enjoying the "Engaging Digital Experience", I was left struggling with a UI exclusively in Polish while waving a marker around. After trying several games (one of which required a different marker to the one in my egg, and another which filled a white screen with red dots), I finally ended up on one where you "bop" the characters in the corners with your head to win points. Fun times. 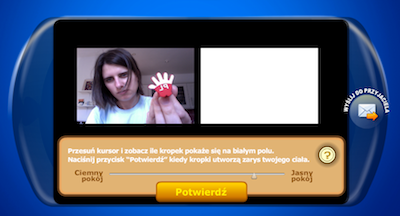 If I'm 27 and felt more than a little jealous of my friend cracking on with assembling a self-propelled boat, I can only imagine the frustrated tears of a child attempting to get this thing going. The Kinder Magic smacks of a bored creative team attempting to band-wagon on the "cool new thing" yet ultimately alienating the very digital instinctives they were trying to engage with. Kids today may be digitally savvy, but they are still kids - they won't love something just because it's on a computer, they will love it if it's simple, fun and - ideally - in a language they speak.
Posted by Camillastore at 1.5.11