Armed with an extensive Christmas shopping list and a rare free day, I decided to finally visit Westfield as a proper shopper - rather than a frazzled retailer liaison! Sunlight bounced across the marble floors, shop fronts battled for attention with eye-catching window displays and happy shoppers meandered, bags in hand. I had quick chat with some of the shop staff as I went round and was really thrilled to be met with warm smiles and efficient, knowledgeable service - proving that Westfield was staying true to its word about 'raising the game' amongst its retailers. While Matthew at Tabio said that sales had been really great in the run up to Christmas. 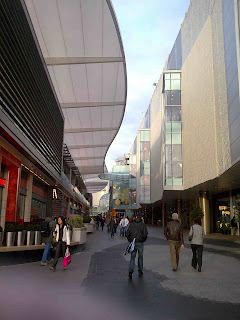 But - yes, you knew a 'but' was coming - I'm not entirely convinced they have understood the habits and preferences of the London shopper. Westfield London was meant to leave behind preconceptions about British shopping malls and compete with the likes of Bond Street, Regent Street and Oxford Street. Sure enough there's all the new, boutique-y shops we love, like The White Company, Terra Plana, and Twenty8 Twelve, but it is not shops alone that makes us adore a skip through W1.

Walk along Regent Street and you cannot help but marvel at the grand, almost ceremonial sweep of the Nash curves, or revel in the aspirational pangs created by lower Bond Street, or meander in a dream-like state around Liberty - all these experiences are what makes London... well, London. You may start the day with a strict to-do list, but return empty-handed and you will not feel like you have missed out. I wish so much I could say the same of Westfield, but despite its manageable size, covered walk-ways, and clever mix of fashion and food there was no additional 'experience'.

London takes its personality from being an old city, which is steeped in history, and forges its very character from the weather-beaten streets, while its citizens place their faith in the past and preservation of tradition. Westfield London, however, is a mere baby - Londoners are still coming to terms with this alien approach to shopping. Nevertheless, it is still early days and perhaps the centre is still finding its groove, its rightful place on the Capital's fashion map.
Posted by Camillastore at 8.12.08