Let's go back 4 or 5 years. A smattering of aspirational role-models from Heidi Klum to Keira Knightly are spotted in what the world initially decried as the the ugliest boots known to man. When pressed on the subject of their shodding, said celebrities revealed that said boots were, in fact, Uggs - lined with sheep's wool and owned universally in Australia. As a result, the fashion elite - not wanting to question the authority of either celebrity taste nor the continent that gave them that bastion of afternoon entertainment Neighbours - started shipping them over in their hundreds. 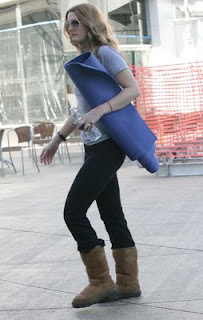 Within seconds of fashion's most twinkly toes hitting the soft lining, it was generally understood that the gentle sex was being offered a rare treat - namely being warm and comfortable while simultaneously making a serious sartorial statement. (Why else are the glossies currently pushing the 'pyjama' look so hard?). And so the trickle down effect began. Over the following 18 months Ugg boots marched through the pages of Vogue, Elle and Marie Claire, striding on to the likes of Glamour and Cosmo, before finally arriving a little scuffed and soiled in Heat and Now.

Which brings me to my current dilemma. In 2006 I couldn't decide if they were Ugg-lee or Ugg-ilicious. In 2007 it all got a bit band-wagony. And now, in 2008, I've got seriously cold feet - both metaphorically and physically. Not since wall mounted plasma TVs has a product gone so swiftly from bohemian, off-duty Oscar-toters to Footballer's wives on Cribs. Ugg Boots now go hand-in-hand with Juicy Couture track-suits, LV luggage and designer dogs. Their price tag alone makes them practically impossible to wear post-modern ironically unless you are super-rich and even then, there's no way to play them down. But if you want warm tootsies this winter, there is no comparison. And so there lies the question - to Ugg or not to Ugg? What's a non-Essex girl to do? 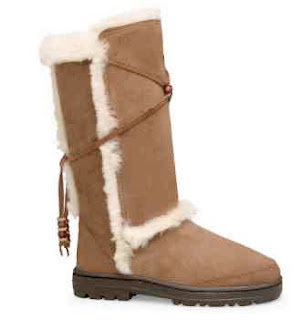 And don't even get me started on Men in Ugg Boots. I mean, really? Really?