With all the buzz surrounding the release of The Rum Diary film, I've been imploring my friends to read the book before giving in to the visual delights of Johnny Depp. The novel, written when Hunter S. Thompson was still just a kid, is one of my greatest literary indulgences - a vivid depiction of anarchic escapism that I return to year after year. 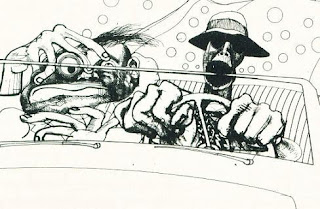 I first read Fear and Loathing in Las Vegas when I was 16, sparking a near-feverish devouring of every bit of "Gonzo" and New Journalism I could get my hands on. The Electric Kool-Aid Acid Test, The Armies of the Night, In Cold Blood, Hell's Angels, the articles of Tom Wolfe… after years spent wading through the tomes associated with English Literature GCSE, the realisation that writing could be this electric blew my teenage mind. But I didn't just want to write like Thompson, I wanted to think like him - to experience life through rolling eyes and be able to nail it still bleeding to the page.

I recently read Fear and Loathing in America - the collected letters of Thompson. From his long correspondences with friends, to stern notes to American Express, his gonzo style teeters constantly between powerfully charming and indiscriminately threatening. Across it all and most surprising, perhaps, is his organisation. With all the tales of drug abuse, politico baiting and cop taunting, it's easy to forget that Thompson was a highly successful and diligent journalist. Quite a lesson to writers who simply want to talk the talk; walking the walk, no matter how stumbling or crazed, takes a business-like dedication.


"Because what happens to anybody who gets into any kind of forced/regular writing is that he's bound to make a useless fool of himself now & then… and it's hard to set a price on that kind of reality."

Through all of Thompson's work runs his ability to overcome the most basic of human emotions, and one so raw in anyone attempting any form of creative endeavour - the fear of failure. Even at his most ranting, he possesses a self-belief which seems to transcend ego or arrogance. Incredibly, Thompson never fears or loathes his own opinion. 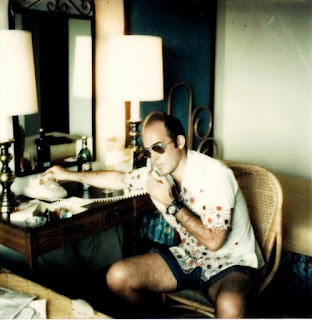 But while Thompson's journalistic style hugely inspires my own writing, he also stands - cigarette in one hand, gun in the other - on a great pedestal in my mind. In times of great stress or emotional turmoil, Thompson represents the promise of being able to go missing from one's own life, should circumstances dictate. As he wrote in The Rum Diary, "The race is not to the swift, nor the battle to the strong, but to those who see it coming and jump aside". There's great comfort to be found in the notion that - for the price of an airline ticket and large bottle of Habana Libre, one can abandon one's grocery shopping in the Whole Foods car park, leave a message at home to let them know you've "gone to take care of matters", and simply "jump aside" somewhere where the rum is cheap and the sea stays warm late into the night. Hey, The Bible may work for some, but I sometimes need something a little stronger.

"PS - I'm definitely in a writing mood these days; the angst has come to a head - let's not blow it this time."