Seems only fitting to add my voice to the millions of views currently being expressed around the world, in many different languages and on many different platforms. The London Paper tonight asserted that this was America's Princess Diana funeral and, certainly, the Americans are giving it all the national outpouring of grief we saw back then. How it differs, however, is due to the exponential growth in social networking. Never before have platforms like Twitter, online newspapers and blogs allowed every view to not only be expressed in real time but also re-tweeted, commented upon and to 'go global' in a matter of seconds. In 1997, could a friend of mine have created and uploaded a tribute film to YouTube within hours of the news breaking? Could the New York Times have crowd sourced photos from the memorial event via Twitter? Could we have watched events unfold via live streaming on the Internet? As technology makes us further and further removed from reality, events which unite us all through communal emotion act as a release. And yet we turn to technology to reach out to others and share the outpouring of feeling we are experiencing. We are living in strange times - times of change, access and democracy of reporting. 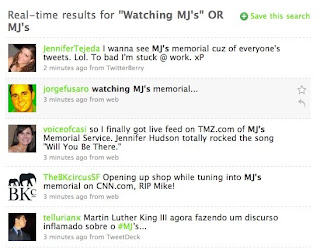